Belting out a tune ‘helps those struggling to breathe’ 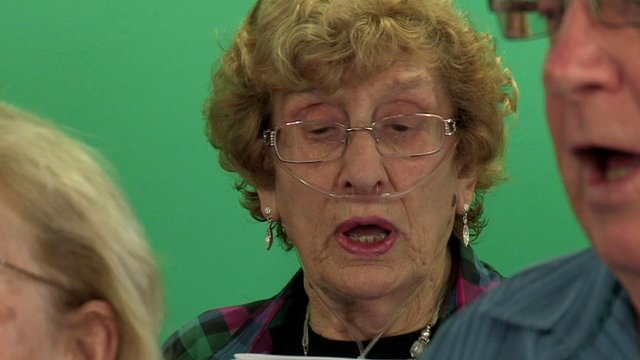 Around the world an estimated 64 million people are struggling to breathe on a daily basis. But could a simple sing-song bring the relief they are looking for?

“If I want to walk any distance then I find a landmark about 15 paces away, make for that and stop to get my breath,” says Jane Petto, who lives near Tunbridge Wells in Kent.

“And if I see stairs – just looking at them tires me out. They take forever.”

Jane is one of millions of people worldwide who suffer from Chronic Obstructive Pulmonary Disease, or COPD.

It is a lifelong condition caused by damage to the air sacs and passages that make up the lungs – and can make breathing a constant battle.

The World Health Organization expects COPD to be the third leading cause of death by 2030.

But despite having a profound impact on her daily life, there is one activity that gives Jane some respite – singing.

“When you’ve got COPD, breathing is on your mind all the time. But strangely I don’t notice it when I’m singing. I can hold a note for ages,” she says.

Surprising as it may sound, it has long been suspected that singing can help people with breathing difficulties.

But now a new long-term study on COPD and singing from Canterbury Christ Church University in Kent has shown that the benefits are real.

Dr Ian Morrison, a senior research fellow and one of the project’s authors, said: “Lung function improved dramatically, particularly after about five months, once people had got used to what they were doing and changed their breathing habits.”

“To get such an improvement really was quite remarkable.”

Joining a choir is by no means a conventional solution for such a serious illness.

But the research team felt they had good reason to investigate its effects.

Dr Morrison says that people with breathing problems tend to develop a lot of anxiety about the very process of inhaling.

“The tendency is to do ‘gaspy’ breathing so they’re taking short little breaths.

“This actually fills up the lungs without clearing them, making it even more difficult to breathe.”

Due to their obstructed airways, many people with COPD already find emptying their lungs a challenge.

Fill your lungs: the art of breathing

Gasping makes the problem worse and can, in the most serious cases, lead to a build-up of carbon dioxide in the blood, which can result in respiratory failure.

In contrast, the techniques used in singing encourage people to breathe in a much deeper, more controlled manner.

“The whole musculature around the lungs, throat and the upper chest improve with time,” says Dr Morrison.

“They use what they have much better and you really see a difference in the skill of actually breathing.”

To test its effects, Morrison and his colleagues asked over 100 COPD patients – ranging from mild to severely affected – to attend weekly singing sessions over a 12-month period.

They measured their lung capacity with a device known as a spirometer – which looks a bit like a giant breathalyser – and asked participants to fill in a questionnaire to find out on a qualitative level how they were feeling.

One of the tests involved measuring how much air a person could force out in a rapid puff.

“On average the people in our study had 50% of expected lung function,” said Prof Stephen Clift, the study’s lead author.

“That means about 1.5 litres of air in a one second puff. For healthy lungs, we would expect something more like 3 litres.”

Without treatment, people with COPD can expect to see the size of their puff decrease by around 40ml a year.

The very best the team had hoped for was that after singing regularly for one year, the size of that puff would stay the same.

“Instead we got an increase of 30ml,” says Prof Clift.

“Although the changes are small, the progressive nature of COPD means that any loss of function year-on-year is going to be more significant for them.

“In our study, we not only appeared to halt the decline but people showed a small improvement.”

Dr Morrison added: “There’s also the social and psychological side, because any long term condition is isolating.

“So if people can get out and do things and get peer support, then their wellbeing improves as well.”

In terms of treating COPD, the study’s results are enticing.

Of the deaths predicted by the WHO, most will occur in low- and middle-income countries.

The beauty of singing is that whether you’re Tom Jones or tone deaf, anyone can strike up a tune anywhere they please – for free.

Cooking in indoor stoves and working in dusty places can lead to COPD, but by far the biggest risk factor is cigarette smoking.

It accounts for 80% of COPD cases worldwide, and quitting smoking is the best advice, according to Dr Penny Woods, chief executive of the British Lung Foundation.

“COPD is a chronic disease and it cannot be cured – the damage is irreversible.

“However, someone already diagnosed with COPD could greatly decrease the progression of the disease if they give up smoking, helping them maintain a better quality of life for longer.”

The study’s authors certainly do not claim that singing can cure COPD or be an alternative to interventions such as giving up smoking.

But Dr Morrison thinks that it could be a useful tool in helping people to manage the condition and live with it day to day.

“Deep down, what we’re looking for is singing on prescription for various long-term conditions,” he says.

“However this was only a feasibility study so it wasn’t randomised and there wasn’t a control. But we can now set up a controlled trial where some people sing, some people don’t and that would be even more powerful way of showing these good results.”

But volunteers like Jane are already convinced that singing has made a difference.

“Surviving as I have with everything that’s gone against me, I put it down to singing.

“I’ve been involved with singing all my life and there’s so much going on with the words and the harmony that you’re not thinking about breathing at all. But yet the breathing is working.”

People look at people we call geniuses, people who are at the very, very top of their field and think what do they have? They must have some kind of quality that all these other people don’t have and they must have been born with that because you can’t see what it is.

That’s what this researcher named Anders Erickson wanted to know and it’s been the subject of his own lifetime of study. He has built an army of researchers to study the invisible processes of acquiring skills and going from mediocrity to being really good at stuff.

In Their Own Words is recorded in Big Think’s studio.